Of Course Seattle Computer Recycling Will Recycle Your Desktop Computers and their parts including motherboards, and ram.

We recycle at no charge desktop computers, and all brands of laptops, and we wipe the data for free.  See – Secure Data Destruction – . We also take household electronics, cell phones, tablet pc’s, cameras, and stereo equipment. We do not recycle appliances. – Northwest Metals Recycles Appliances – Please check out our Laptop Recycling page for more information about our laptop recycling and refurbishing services. Every single desktop computer brought in, or picked up from your company for recycling is inspected to see if it can be repaired and reused in any way. Many computers that are broken or are not worth preparing for re-use have parts that can be used in other computers, or sold and these are removed.

Our focus is to first find a use for all computers or other equipment left for recycling, not to just grind them up for the metals, and plastic. We also donate recycled computers to charities. If you know of a local charity that needs computers have them contact us. We recycle far more computers than we can sell in our store, and have been helping charities with their computer needs for many years. We also help charities by repairing their recycled computers. Call us – Contact Seattle Computer Recycling – to find out how we can help.

Reusing Recycled Computers Is Good For The Planet

Re-using computers and their components is far better for the environment than melting them down and using the metal. In many cases it takes more energy to manufacture a computer than that computer will use in it’s lifetime. Please bring in your desktop computers, laptops, servers, networking equipment, lcd monitors and other types of e-waste for recycling.

There is no charge to recycle desktop computers, and laptops, or other electronics such as cameras, cell phones, POS systems, tablets and other devices at Seattle Computer Recycling.

We Do Not Recycle Televisions Or Appliances!

We do not recycle televisions or appliances. There is a small fee for recycling printers, but we do recycle them, and dispose of them properly.

Many of our customers have old motherboards they have removed from their computers because they have failed, or they did an upgrade. We recycle “pulled” motherboards, ram, and video cards.

Recycling computers instead of putting them into landfills helps the environment in many ways. For one if you recycle a computer it will keep the toxic substances found in computers from going into the soil, and leeching into the groundwater. Also the motherboards from recycled computers are ground up, and the lead, copper, and other elements are re-used in manufacturing. The metal from recycled computers is of course also melted down and reused. Unfortunately the plastic found in computers is not recyclable, and will end up in a landfill.

Recycle Your Old Computers: If you have a number of old computers sitting around, or in storage, it’s time to recycle them. If they are in your garage, basement, or storage their components can’t be broken down for recycling. There are millions of tons of computers and e-waste sitting in people’s homes and businesses that should be recycled. If the computer and laptop recycling rates went up, mining becomes less necessary. Recycle those computers laptops and Macs today! Help the environment.

We Will Pick Up Recycled Computers

Computer Pick Up Service: Seattle Computer will come to your business location and for a small fee, or for free will pick up your E-waste. This includes computers, laptops, networking equipment, cables etc. If you have the need for a truck to come to our location to recycle computers check out our – Computer Pick Up Service – webpage. Our computer recycling pick-up service covers the entire Puget Sound Region. From Bellingham to Olympia. 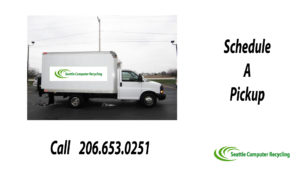 Our Street Address Is:

Our Hours Of Operation Are: